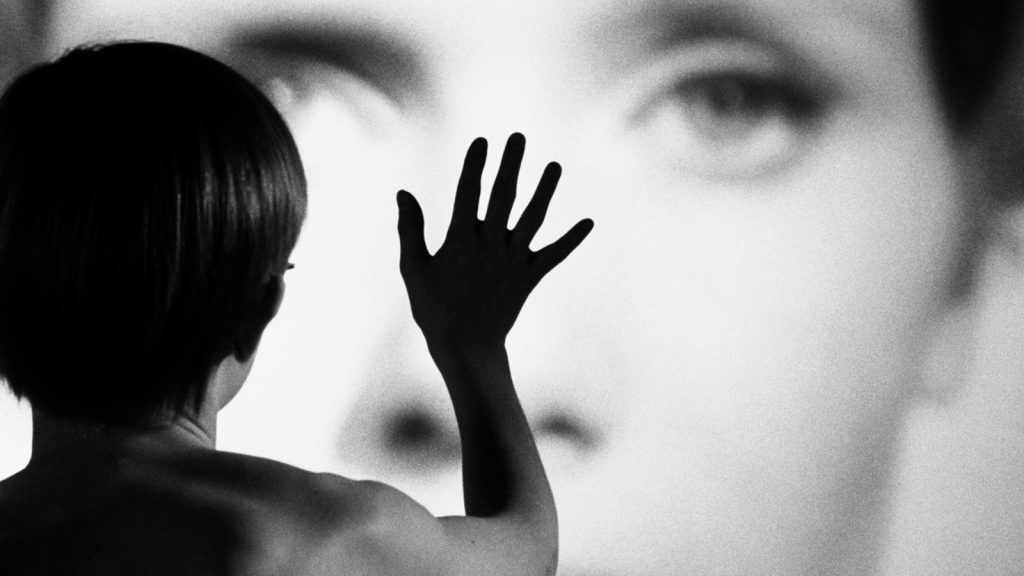 Ingmar Bergman, 1966 film, Persona is about self and emotional contagions.  The ease at which we can absorb others’ experiences and identity.  Bergman films are minimalistic in form.  Bergman uses photographic language to advance the narrative.  Of course, Elisabet’s nurse has to be a nun.

Bergman dresses the women similarly once they arrive at the beach.  In the cleaning of the mushrooms, both women are wearing plain tops, Elisabet a white turtleneck and Sister Alma a slightly darker button-down blouse.  They both are in straw hats, Elisabet’s lighter in color. They are humming quietly together. Elisabet takes Sister Alma’s hand to inspect it closely when Sister Alma warns of the harm of comparing hands. This is the first indication that Bergman is suggesting they are becoming one. Even though Sister Alma is the voice for both women, their experiences interweave with each other.  Sister Alma wants a family and has ended her pregnancy due to the circumstance she conceived the child. Elisabet was pressured to be a mother in order to be a full woman she must bear a child, according to social norms and expectations.

Noël Carrol states in his article on Kraucauer that “What directs our attention the photographic elements of film are its capacity to fulfill a contingently, historically situated function — the task of redeeming physical reality.  The approved use of film to record and reveal physical reality in terms of the upstaged, the indeterminate, the fortuitous, and endlessness down not follow here from film’s putative status as essentially photographic, but from the fact that the primary role or value of film in our time is to function in a way that redeems physical reality.”

“The core of the historical/cultural argument goes like this:

“The argument can then be continued, arguing that the technical properties and narrative structures of film should be subordinated to the purpose of the photographic elements in order to fulfill the pressing social role of film—-the redemption of physical reality for people lost in scientific abstraction.” (Carroll, 297)

Bergman reminds us this is a film using the properties of technology to build this fantasy.  The insertion of film technology confirms Kracauer’s theory on the alienation that technology plays in our lives.  The narrative is an interweaving of both connections between the woman and the alienation of the self.  He doesn’t state each side of the argument clearly, one side does not stand out above the other, and they are both present.  Yet, Bergman’s overall purpose is to tell how we each have internal lives, public lives, and the lives we share with others.  Through these relationships, we can become alienated from ourselves.

Brainz Magazine
Rene Estes2022-01-27T17:26:23+00:00
Page load link
Manage Cookie Consent
To provide the best experiences, we use technologies like cookies to store and/or access device information. Consenting to these technologies will allow us to process data such as browsing behavior or unique IDs on this site. Not consenting or withdrawing consent, may adversely affect certain features and functions.
Manage options Manage services Manage vendors Read more about these purposes
View preferences
{title} {title} {title}
Go to Top