The Piano, A Film Criticism

The Piano, A Film Criticism 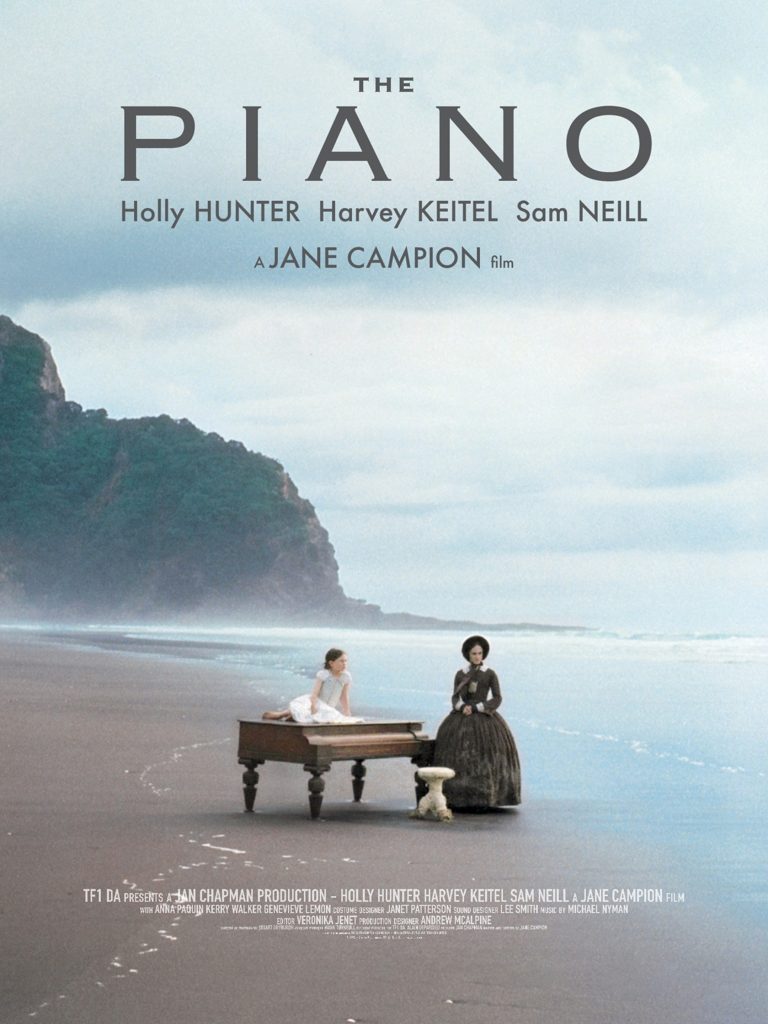 A Jane Campion Film, 1993.  Campion as an auteur filmmaker holds to the female gaze, as in her 1993 film The Piano. A period piece, set in 1851, a mute Scottish woman, Ada McGrath (Holly Hunter), arrives in colonial New Zealand for an arranged marriage, with her precious young daughter Flora McGrath (Anna Paquin) and beloved piano in tow. Her new husband, Alisdair Stewart (Sam Neill), refuses to transport the piano to their home. George Baines (Harvey Keitel), his neighbor, offers a deal to take the piano off his hands. Baines agrees to move the piano in exchange for piano lessons.

What does Ada have that the others want? At first, it seems like sensual desire, but it is more than that. It is a desire for intimacy that the men can only understand in sexual terms. Campion’s choice to strip away the spoken language from Ada allowed for all other forms of communication to take center stage. Ada’s communication is sensual intimacy with her piano and her daughter.

“Silence affects everyone in the end.” The film opens with Ada looking through her hands in a voiceover, telling the audience she hasn’t spoken since she was six years of age, and went on to let us know about her arranged marriage to a man who doesn’t care if she can’t speak. The piano is her voice.

Throughout Jane Campion’s work, we see this where she suppresses one element for the other parts of life while exploring the other elements. This technique creates an intimacy that we also see in Terrance Mallick’s films.

Ada’s arrival at her new home is a bit tumultuous, and her husband undervalues her need for her piano. Her young daughter is her speaking voice and translator for the audience and the other characters in the film. A photograph replaces the wedding ceremony, and no vows are exchanged. She reveals her real passion when Ada runs to the window looking out, worrying about her piano and true love.

Her husband lets her know he has to leave for a few days, and she and her daughter head out to find the piano. They arrive at George Baine’s house, asking him to take them to the beach where they landed. He refuses, based on the excuse he doesn’t have the time.

He bends under their pressure, arriving at the beach where the piano sits. Ada plays until the sunset, and her daughter dances in a duet of passion, love, and intimacy. Baines watches and absorbs their passion and intimacy as an onlooker. An aerial shot shows the stage they built for the piano of shells and beach debris that day to celebrate the instrument.

A practical man, Alisdair questions Aunt Morag (Kerry Walker) about Ada’s sanity and mental condition when he sees her teaching Flora voice lessons. Upon the return of Ada’s husband, he finds her playing the kitchen table in a makeshift piano where she carved the keys into the wood. Flora singing as they work on her voice lessons.

George Baines is listening just outside the open door in shadow. Clearly, Alisdair cannot understand the creation of art and the imagination at work due to his lack of imagination. Campion often explores paradoxes within her films. Creativity contrasts the practical black and white—the energy of the feminine vs. the masculine and fluidity vs. concrete is studied.

Baines proposes a trade for the eighty-eight acres of land for the piano, to include lessons. Upon Alsidair’s acceptance of the deal, Baines brings the piano to his place, and Ada will teach Baines how to play. Ada and Flora return from the first “lesson. “Baines isn’t interested in lessons but reliving the time at the beach when she played. The sensual experience of her playing.

The cold indifference between Alisdair and Ada contrasts with Ada’s deep intimate relationship with her daughter and her piano. This contrast continues throughout the film. Baines continues to use the piano to leverage getting physically closer to Ada. In her absence, he polishes the piano, naked. Timestamp 45:51 Baines begins undressing her with demands in exchange for the ownership of her piano. Prostituting her and exploiting her vulnerabilities is the oldest manipulation men have done to women since patriarchy began. How sick are we of it! I know I am! Campion displays this hierarchal society brilliantly. He manages to have her in bed with him and becomes his lover step by step.

His seduction and pressure are successful, unlike her husband, who is aloof and indifferent. The piano is the vehicle for Baine’s success. Then Baines frees her from being chained to his demands for access to her piano. Ester Perel has noted that eroticism needs space to grow and, like fire, needs air to breathe. Baines frees her by returning her piano to her and telling her he wants her to desire him not to be obligated to him. When she is free to be at one with her piano and imagine being back in bed with Baines sparks her desire. It is through this freedom that Ada’s desire grows. The film concludes with Alisdair’s discovery of her affair with Baines, and in retaliation, he chops off one of her fingers. She is shipped home to Scotland. On the way home, they send her with her piano and daughter. The crescendo is her telling the crew on the boats to dump her piano. She slips her foot into the rope going overboard with it. In death and rebirth, underwater tied to her piano, she slips off her shoe to begin this new life.

Brainz Magazine
Rene Estes2022-01-27T17:21:04+00:00
Page load link
Manage Cookie Consent
To provide the best experiences, we use technologies like cookies to store and/or access device information. Consenting to these technologies will allow us to process data such as browsing behavior or unique IDs on this site. Not consenting or withdrawing consent, may adversely affect certain features and functions.
Manage options Manage services Manage vendors Read more about these purposes
View preferences
{title} {title} {title}
Go to Top